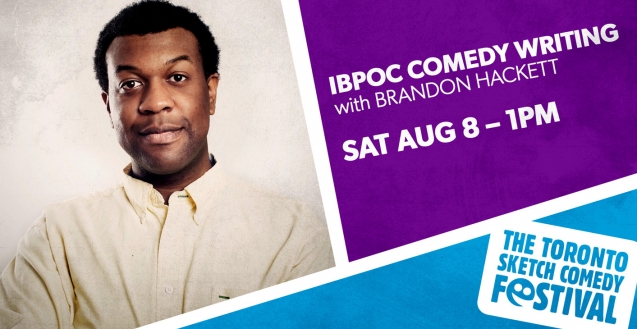 UPDATE: This workshop is currently full!

We are happy to announce a new IBPOC Comedy Writing workshop as part of the ongoing Professional Development program for the Toronto Sketch Comedy Festival.

This is a FREE workshop for IBPOC comedians who wish to sharpen their comedy writing skills for stage or screen. Learn how to collaborate with others in a writers’ room or group setting, and find the humour in your real life stories. The only prerequisite is an interest in exploring your comedic voice.

Brandon Hackett is a Toronto-based television writer and performer.  He’s written for the comedy series This Hour Has 22 Minutes, Gary and his Demons, Tall Boys and The Beaverton, the latter garnering a Canadian Screen Award nomination for Best Writing in Variety or Sketch Comedy.  He is an alumnus of the Second City mainstage, where he wrote and performed four revues, including Come What Mayhem and The Best is Yet to Come Undone.  He also co-wrote and stars in This Art Works!, a CBC web miniseries co-produced by Madeleine Co. and OCAD University. Most recently, Brandon saw a project through several stages of development, including bible development, story arc, and scripting, at CBC with Don Ferguson Productions.